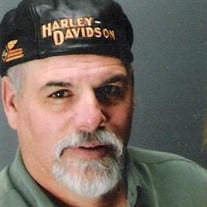 Thomas Arnold Graves, 60, of Inwood, WV, died Wednesday, February 5, 2014 in the VA Medical Center, Martinsburg. He was born April 28, 1953 in Kittery, ME the son of Hugh Presley and Virginia Lee Bowen Graves. He was married to Patty J. Graves. Mr. Graves served in the US Navy and had been a mill worker. He was a member of the Winchester Eagles, a past member of Rolling Thunder, a member of the Community Rehabilitation Pool and an advocate of Access Independence for many years. He played in several local bands for many fundraisers. Surviving in addition to his wife are his mother of Berryville; two stepdaughters, Kelly Honaker of Strasburg and Katlyn Saville of Stephens City; a stepson, Kevin Saville of Stephens City; a sister, Reba Jean LaFollette of Winchester; a brother, Ronald Graves of Bunker Hill and six step-grandchildren, Koby Bly, Kerigan Bly, Kassy Bly, Kamden Bly, Bayley Saville and Kaydence Saville. A brother, Michael Graves, is deceased. A memorial service will be Tuesday, February 11, 2014, at 7:00 p.m. in Phelps Funeral Chapel, 311 Hope Drive, Winchester with , Chaplain Christina J. Brooks-Signo officiating,. Friends will be received after the service until 9:00 p.m. www.phelpsfunerals.com

The family of Thomas Arnold Graves created this Life Tributes page to make it easy to share your memories.