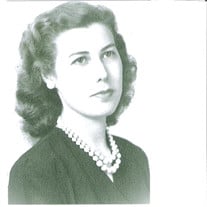 Ruth Lancaster Patton, 97, of Winchester, died Saturday, August 24, 2019 at her home. She was born October 6, 1921 in Roanoke, VA, the daughter of Marshall Milton and Rose Marie Ross Lancaster. She married Kenneth Charles Patton, Sr. on May 28, 1943. Mr. Patton is deceased. Mrs. Patton, along with her husband, was active in Christian ministry for twenty years. They worked with the Christian Retreat in Bradenton, FL and Heritage USA in Ft. Mill, SC. She was a long-time member of the Braddock Street United Methodist Church. Mrs. Patton worked for Western Union during WWII in the war death notification department. She was active in the Winchester Lioness Club. Surviving are a daughter, Cynthia Patton Hodge of Williamsburg, VA; two sons, Kenneth C. Patton, Jr. of Huddleston, VA and Jeffery R. Patton of Winchester and a sister, Josephine McIntyre; seven grandchildren; nine great-grandchildren and numerous nieces and nephews. A brother, Marshall Milton Lancaster, Jr. and a sister, Betty Lancaster are both deceased. A memorial service will be Saturday at 11:00 a.m. in the Chapel of Westminster-Canterbury, Winchester with Rev. Elizabeth Lewis officiating. Burial will be private in Mt. Hebron Cemetery. Memorials may be made to the Fellowship Fund of Westminster-Canterbury, 300 Westminster-Canterbury Drive, Winchester, VA 22603.

The family of Ruth Lancaster Patton created this Life Tributes page to make it easy to share your memories.