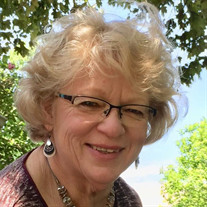 Ruth Marilyn Anderson, 70, of Winchester, passed on Friday, March 23, 2018 at Blue Ridge Hospice surrounded by her husband and children. She succumbed to pancreatic cancer after a hard-fought year-long battle that began while traveling in Australia with her husband. She was born August 7, 1947 in Cooperstown, NY, the daughter of Elsworth and Ina Eldredge Lambert. She grew up on a dairy farm, the youngest of 7, and became a hairstylist. She was known as “Red” for her beautiful red hair. She married Tim Anderson on August 23, 1969 in Sharon Springs, NY. “Truth” (Tim + Ruth) were best friends approaching 50 years of marriage who made friends across the world during their many adventures and travels. They lived overseas, started and ran a hair salon, served their communities, and grew a loving and devoted family. She enjoyed traveling, camping, capturing every moment in photos, games, art, and most of all her Family. Her greatest joy was being involved in the lives of her children and grandchildren. She was an amazing mother, grandmother and “Mama Ruth.” As a hairstylist, she enjoyed making people feel beautiful inside and out. She impacted the lives of so many, and will be remembered always by those she knew. In addition to her husband, she is survived by her 4 children and 8 grandchildren: Tanya & Jeff Kittell, children Josh & Rachel; Trever Anderson, children Aidan & Khail; Ginger & Jon Eye, children Asher & Ember; and Brooke & Donny Comer, children Anilie & baby-on-the-way; as well as 5 siblings: Edie Schroer, Larry Lambert and wife Karen, Al Lambert and wife Marlene, Ray Lambert, and Jim Lambert; and many nieces, nephews, and extended family. She was preceded to heaven by her parents, sister Coreen VanArsdal, sister-in-law Janet Lambert, and brother-in-law Herman Schroer. A memorial service will be held on 5 April at 5:00 pm at First United Methodist Church, 308 N. Braddock St. Winchester, VA, officiated by Reverend Will White, where she was a member for more than 30 years. Family Visitation 4-5 pm, Bereavement Dinner 6 pm. On-street parking is very limited. Recommended parking at the Loudon St Auto Park at 50 E Fairfax Ln, 1 block east of the church. Additional services will be held this summer in Sharon Springs, NY followed by internment in a family plot at Ames Cemetery. In lieu of flowers, memorial contributions “In Memory of Ruth Anderson” may be made to the First United Methodist Church Capital Improvement Fund. On-line donations are not possible.

Ruth Marilyn Anderson, 70, of Winchester, passed on Friday, March 23, 2018 at Blue Ridge Hospice surrounded by her husband and children. She succumbed to pancreatic cancer after a hard-fought year-long battle that began while traveling in Australia... View Obituary & Service Information

The family of Ruth Marilyn Anderson created this Life Tributes page to make it easy to share your memories.