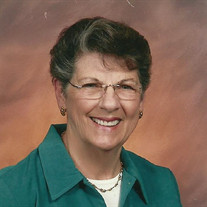 Ramona "Mona" Brooks Pressley, 86, died Tuesday, June 13, 2017 at Westminster Canterbury, Winchester. She was born October 22, 1930 in Worcester, MA the daughter of Dr. Romeo and Ella Fleming LeClaire. The family lived in Southbridge, MA and spent summers at Webster Lake in Webster, MA. She graduated from the College of New Rochelle with a degree in psychology and later, earned a master's degree in Education. Professionally, she was an elementary school teacher for 27 years. Mona was a member of Christ Episcopal Church. She served on the Vestry, Altar Guild, two stewardship committees, started a women's bible group, was a convener for three seminarians, worked in the treasure box and served on its executive board, ushered and was a Lay Eucharist Minister. She also worked at the reception desk in the church office and served on two search committees. She served on the Fellowship Fund Committee at Westminster Canterbury where she and her husband Clyde, ultimately made their home. After retirement, she became very active in the community. She volunteered for Habitat for Humanity, the Handley Library gift shop. Her membership in the P.E.O. Sisterhood brought much enjoyment to her life. The lifelong friendship of her Sisters and the process of helping women of all ages reach their educational goals was a joy to her. She was formerly married to Wm. G. Meier, Jr., Wm. F. Brooks, and W. Clyde Pressley who are all deceased. Mona is survived by her children, Kathleen Anderson wife of Porky (deceased) of Winchester, Elizabeth Davies and her husband, Robert of Stephens City, Kurt G. Meier of Winchester, and William Meier III and his wife Barbara Emrey of Winchester; her wonderful grandchildren, Erin E. and Amy L. Thomas, Brooke E. and Hannah M. Davies, and Kevin R. and Billy G. Meier IV; great-grandchildren, Colin D. and Ava R. Thomas, Alton G. Kruse, Wm. G. Meier V, and Adrian C. Meier. A funeral will be 11:00 a.m. Wednesday in Christ Episcopal Church 114 W. Boscawen St. Winchester 22601with Reverends Webster Gibson and Bridget Coffey officiating. Interment will be at the church. Friends will be received after the service in the fellowship hall of the church. Memorials may be made to Christ Episcopal Church Memorial Fund at the above address or to the Fellowship Fund of Westminster Canterbury 300 Westminster Canterbury Dr. Winchester, VA 22603.

The family of Ramona Brooks Pressley created this Life Tributes page to make it easy to share your memories.