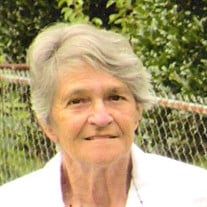 Martha Ludell Sudduth, 75, of Stephens City, passed away Wednesday, July 2, 2014 at her residence with her loving husband and family by her side.  She was under the care of Blue Ridge Hospice. She was born February 27, 1939 in Middletown, VA the daughter of Edgar H. and Virginia L. Devers Campbell. She was married to Robert B. “Bob” Sudduth. Mrs. Sudduth had been a DMV clerk with Tripps Auto Sales of Berryville. She was a member of the Berryville Women of the Moose. She participated in the annual bizarre at Middletown Volunteer Fire & Rescue for many years where everyone enjoyed her homemade bread, cinnamon rolls and famous apple dumplings. Surviving in addition to her husband are five children, Kevin Combs and his wife Sandy, Terry Combs and his wife Valerie, Tammy Dellinger, Laura Combs and her husband Willard and Barbie Hurt and her husband Jeff; two sisters, Marry Sheets of Capon Bridge, WV and Ruby Orange of Troutville, VA; three sisters-in-law, Elaine Campbell of Winchester, Margarite Campbell of Stephens City and Dot Campbell of Woodstock; eleven grandchildren; thirteen great-grandchildren and a large number of nieces and nephews. Six brothers, Marvin, Julian, Haywood, Edgar Jr., Arthur and Joeloyd Campbell and two sisters, Virginia Raythel Tomblin and Margaret Walter are all deceased. A funeral service will be Monday, July 7, 2014, at 11:00 a.m. in Phelps Funeral Chapel, 311 Hope Drive, Winchester with Pastor Eric Farel and Rev. Dr. Ken Patrick officiating. Burial will follow in Green Hill Cemetery, Stephens City. Casket bearers will be Mike Hurst, Dave Smith, William Sibert, Keith Covert, C.T. Hardesty, IV and Heath Segal. Honorary bearers will be M.T. Brown, Kirby DeHaven, Scott Travers, Jim Lillard and Steve Ritter. Friends will be received on Sunday, July 6, 2014, from 6:00 p.m. until 8:00 p.m. in the funeral chapel. In lieu of flowers, memorials may be made to Blue Ridge Hospice, 333 W. Cork Street, Winchester, VA 22601. www.phelpsfunerals.com

Martha Ludell Sudduth, 75, of Stephens City, passed away Wednesday, July 2, 2014 at her residence with her loving husband and family by her side.&#160; She was under the care of Blue Ridge Hospice. She was born February 27, 1939 in Middletown,... View Obituary & Service Information

The family of Martha Ludell Sudduth created this Life Tributes page to make it easy to share your memories.