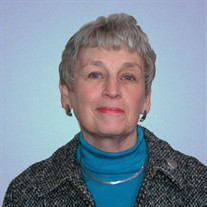 On Friday, March 6, 2020, Karen Bloyd Jones, loving wife, mother and grandmother, passed away at the age of 84. Karen Ann was born on July 20, 1935 in Leavenworth, Kansas to Milton C. (“Cliff”) and Margaret (née Schreiber) Bloyd. She received her Occupational Therapy degree from the University of Kansas in Lawrence in 1958. On May 31, 1958, she married Ramon (Ray) William Jones at the First Presbyterian Church of Leavenworth. They raised four sons, Steve, Roger, Doug and Andy. Ray was an officer in the Navy for 20 years and this resulted in the family moving in military fashion on a frequent basis. Karen had three guiding pillars in her life: Faith, Family and Service. She was a member of Knox Presbyterian Church in Falls Church, VA for 42 years and served as an elder several times, numerous committees, and on the Falls Church Community Service Council, especially the Food Pantry. She and Ray moved to Winchester, VA in 2011 and joined and became active in Opequon Presbyterian Church. Karen is survived by husband, Ray, and her four children Steve (Meredith), Roger (Barbara), Doug (Antoinette), Andy (Terri) and four grandchildren: Morgan, Devin, Hayden and Cole. She was happiest when the family came together for holidays, weddings, birthdays and family events. She was a wonderful, creative cook and her food was always a centerpiece of family gatherings. Karen was active for many years with the Boy Scouts of America program. Starting as Den Mother and rising to serve as Cub Scout Roundtable Chair, she also served on the Silver Beaver nomination and the Meritorious Award committees. She received the Silver Fawn award (conferred on women until merged with the Silver Beaver) in 1974. She organized the Father-Son Bake-off competition and volunteered (coffee & hot breakfast) at many Camporees and National Scout Jamborees. All four sons participated in Scouting with Steve and Roger obtaining Eagle Scout Rank. With Roger, Doug, and Andy as members in the Falls Church High School Marching Band program, she and Ray also served in many volunteer “Band-Aid” capacities including chaperones for the many over night trips as well as the weeklong band camp in Orkney Springs, VA. In 1981, Karen received the prestigious “Mrs. Ork” award. Karen and Ray were also very active in the American Iris Society, dedicated to the promotion and education of growing and hybridizing genus Iris. Together, they maintained a garden, traveled the country as iris judges and proselytized all things Iris. A Memorial service to celebrate Karen is being planned, but due to the Coronavirus, will be announced at a later date. Donations may be sent to Knox Presbyterian (Falls Church, VA) or Opequon Presbyterian Church (Winchester, VA).

The family of Karen Bloyd Jones created this Life Tributes page to make it easy to share your memories.