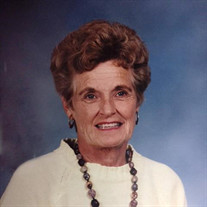 Janet Newlin Kniceley, 87, died Sunday, September 24, 2017, surrounded by her family at the home of her daughter in Winchester. She was born August 2, 1930 in Winchester, VA, the daughter of the late G. Frederick and Catherine K. Jenkins. She married Leonard S. Newlin November 28, 1946 in Winchester and they enjoyed 38 years of happy marriage until his death in 1983. She was preceded in death by her second husband, Dr. Courtney Grim, and is survived by her husband, James S. Kniceley, Jr. Janet was an outstanding homemaker, cook, wife and mother. She was happiest when feeding and entertaining family, enjoying time at the beach and traveling. She was a member of First Christian Church where she served in many capacities including Bible School leader, Youth Group leader, and Sunday School teacher. She was a docent at Belle Grove, a volunteer at Hurst House and a volunteer at Blue Ridge Hospice Thrift Store. She is survived by her three children, L. Scott Newlin (Janet), David T. Newlin (Betsy) and Cathy Newlin Shiffler (Matt); seven grandchildren-Michael Newlin, Jenni Spielman, Christopher Newlin, Bryan Newlin, Aaron Shiffler, Logan Shiffler, and Breauna Shiffler; eleven great-grandchildren; three step-children Vickie Grim, Peter Kniceley, and William Kniceley. She was preceded in death by her sister, Barbara Jenkins Greenawalt and her brother, William H. "Jack" Jenkins. The family will receive friends 6:30-8:30 p.m. Thursday in Phelps Funeral Chapel at 311 Hope Drive in Winchester. A memorial service will be 11:00 a.m. Friday at First Christian Church 75 Merriman's Lane, Winchester, VA 22601. A reception open to all friends and family will follow the service in the church. Interment will be private in Mt. Hebron Cemetery. In lieu of flowers, memorials may be made to Blue Ridge Hospice 333 W. Cork Street Winchester, VA 22601 or the First Christian Church at the above address.

Janet Newlin Kniceley, 87, died Sunday, September 24, 2017, surrounded by her family at the home of her daughter in Winchester. She was born August 2, 1930 in Winchester, VA, the daughter of the late G. Frederick and Catherine K. Jenkins.... View Obituary & Service Information

The family of Janet Newlin Kniceley created this Life Tributes page to make it easy to share your memories.