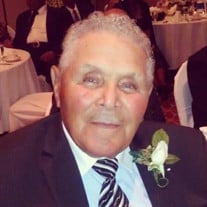 It is with a sad heart that we lost the leader and great friend of our family and community advocate on April the 3rd, 2014, Dr. Henry M. Brooks of Winchester, VA. He was the son of the late, Robert Lee Brooks and Anna Quiett Brooks. His birthplace on May 21, 1918 was 419 S. Braddock Street in one of the upstairs bedrooms. He grew up learning from his grandfather, the late Grandville Quiett the importance of saving and real-estate. He first attended school at the Old Stone Presbyterian church on, or about 1923, moving on to Douglas School which only offered an educaton to the 9th grade. He graduated from Douglas in 1934.He went on to continue his education in Washington DC and graduated from Dunbar High School in 1938. He enlisted in the Army during WWII serving in both the Pacific and European Theaters earning an honorable discharge for his dedicated service. Dr. Brooks always stressed education to all and any that he encountered and he himself was an example of that. Attending Virginia State College, University of VA and finally graduating in 1976  abtaining his PhD. in Counciling Psychology from Walden University. His love for teaching and reaching out to educate people began after WWII at Douglas School where he helped so many.He was a community activist for intergration and was one of the first Black teachers to intergrate Winchester Public Schools in 1964 at Handley High School.So many have told stories of how he educated them with skills that they use to this day. He was the President of the 7th Congressional Black Caucus from 1972 thru 1975, and nominated to represent the State of VA in the 1968 Democratic National Convention in Miami Florida. He and Raymond Radcliff began the Winterization Program here in the Shenandoah Valley and created many programs to enrich the education of many. He was also the President/CEO of Orrick Cemetary Board until his death and was instrumental in starting the Food Lion and strip mall located on Greenwood and Seneney Roads, known as Orrick Commons. Dr. Brooks was driven by family and always was there for us in time of need, either financially or emotionally. We often hear stories of the love of his life Peaches, who died two weeks before their wedding in an accident at which time Dr. Brooks made the decision to never marry, or have children. He instead chose to help our family to expand and have support from him. Dr. Brooks life touched so many rich, middle class and poor. One of his favorite sayings was: In this life if you reach out your hand to help your fellow man, then you life was not in vain. Surviving is a niece Deborrah B. Walker (Dan) her children and other distant realitives and extended family. He was preceded in death along with his parents by his sisters, Ann E. Rowe, Gertrude A. Owens and a brother Robert Q. Brooks. Dr. Brooks requested a private grave service, which will be followed by a Memorial/Repass at the Elks Club located at, 414 North Kent Street at 2:30 PM, April 19, 2014. In lieu of flowers memorial contributions may be made to the Northern Shenandoah Valley Boys & Girls Club located at 598 North Kent Street, Winchester VA 22601. (Obituary was written and submitted by the family.) Arrangements are by Phelps Funeral & Cremation Service, Winchester. www.phelpsfunerals.com

It is with a sad heart that we lost the leader and great friend of our family and community advocate on April the 3rd, 2014, Dr. Henry M. Brooks of Winchester, VA. He was the son of the late, Robert Lee Brooks and Anna Quiett Brooks. His birthplace... View Obituary & Service Information

The family of Dr. Henry Moss Brooks created this Life Tributes page to make it easy to share your memories.

It is with a sad heart that we lost the leader and great friend...