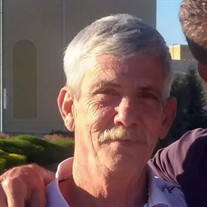 Glenn Edward " Glenn Dawg/Pops" Creswell, 62, of Winchester died Saturday, July 17, 2021 in his residence. He was born September 10, 1958 in Winchester the son of Evan Sr., and Doris Shelton Creswell. He loved being outdoors fishing, hunting, camping, and gardening. He is survived by his children, Brittany Daniels and her husband, Andrew of Winchester, Candace Creswell of Highview, WV, Evan Creswell and Ashley Creswell both of Winchester; grandchildren, Devin, Alayjah, Mikeila, Ky'Leea, and Kylar; a brother, Curt Creswell and his wife Angela, and his former spouse, Dianne Funk Creswell. He was preceded in death by his parents, and a sister, Janet Creswell. A service will be 3:00 pm Monday in Phelps Funeral Chapel 311 Hope Drive Winchester officiated by Pastor Stanford Silver. Interment will be private. Friends will be received an hour prior to the service.

The family of Glenn Edward "Glenn Dawg/Pops" Creswell created this Life Tributes page to make it easy to share your memories.