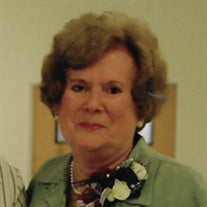 Eugenia Kines "Jeannie" Swisher, 83, of Frederick County passed away Saturday, September 4, 2021 in Envoy Nursing Home. She was born July 26, 1938 in Delaplane, VA the daughter of Warren, Sr., and Julia Piggott Kines. She married her high school sweetheart, Richard A. Swisher, Sr. August 31, 1957. She was a member of Greenwood United Methodist Church, the Eagles, and regularly attended the Moose. Jeannie was a graduate of James Wood High School in 1957. She had worked for the Winchester Star for several years before opening Richards Jewelry store with her husband. In addition to her husband, she is survived by her children, Donna Hower and her husband, George of Cross Junction, Judy Lutz of Glen Gary, Pam Linaburg of Winchester, Rick Swisher, and his wife, Amy of Bloomery, WV; ten grandchildren, and ten great-grandchildren; dear friends Bill and Ruth Taylor. She was preceded in death by her parents; step-mother, Freda Kines; sisters Betty Kines and Peggy Ruble, and a brother, Warren Kines, Jr. A service will be 11:00 am Tuesday in Phelps Funeral Chapel 311 Hope Drive Winchester officiated by Pastor Keiko Foster. Interment will be in Shenandoah Memorial Park. Friends will be received an hour prior to the service in the funeral home. In lieu of flowers, memorials may be made to Blue Ridge Hospice 333 W. Cork St. Winchester, VA 22601 or Greenwood United Methodist Church 726 Greenwood Rd. Winchester, 22602.

The family of Eugenia Kines "Jeannie" Swisher created this Life Tributes page to make it easy to share your memories.