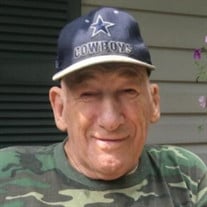 Elwood Richard Brewer, 84, of Winchester passed away Saturday, November 7, 2020 in his Daughter's home in Pennsylvania surrounded by her and his Loving Family. He was born September 24, 1936 in Winchester, Va. the son of Floyd and Ada Ritenour Brewer. Elwood lived in NJ for many years before returning to his home town of Winchester Virginia where he lived for the remainder of his life. He shared a Special Bond with his sister Dorothy who helped him throughout his years and to him there was no one better. He would get her newspaper and they would have coffee every morning together. Elwood was a very hard worker and loyal to many. He worked at several different places like the Rubber Mfg plant in Butler NJ , and Newco Fabric Co. of Newton NJ till he retired. He had also worked for Phillip Yetter on his farm and during that time Philip and Elwood became the best of Friends till his recent passing along with Frank and Alice who lived next to him in Va. for many years till they moved to the Carolina's. Elwood worked hard all his life, he was a Landscaper and mowed lawns in between jobs no matter where he lived either NJ or in his home town of Winchester Va. with his helper Keith till he fully retired at age 83. During Elwood's life he acquired many nicknames, Rebel, Pete and Goober. He also loved his sports, his favorite Football team was Dallas , in his early years. Elwood used to Hunt Raccoon and Rabbit, he enjoyed playing softball with his nephews and his son Floyd. He also enjoyed playing pool with friends and horseshoes with his Brothers Charles and Frankie. Elwood spent his weekends going to Auctions , Flea Markets and yard sales he was always looking for something to add to his many collections of things. He was one of a kind and he will be remembered by many. He is survived by his daughter, Roxanne Williams and her husband, R.B. of Matamoras, PA, Deborah Brewer of Milford, PA, Christopher Brewer of Matamoras, PA, Michelle Brewer of Newton, NJ, Leif Brewer of Andover, NJ; nine grandchildren, Floyd & Caitlin Brewer, Donald & Chiffon Murphy, Heather & Dean Freeman, Kasey & John Douglass, Marie & Daniel Bouer, Brian, Gregory, Tyler, Nicholas Brewer; eight great-grandchildren, Madison Decker, Dean, Janech, and Justice Freeman, Ayla, Avri, and Aveya Murphy, Liv Marie Bouer; siblings, Mary Ann Brewer-Chrisman of Richmond, Charles Brewer and his wife Kaye of Winchester, and Frank Brewer of Weaverville, NC, and many nieces and nephews. His son Floyd A. Brewer preceded him in death, as well as his siblings, Dorothy Snapp, Winifred Smith, Hassel Brewer, Anna Van Tassel, Rev. Johnnie Brewer, Kinzel Brewer and Helen Brewer. A funeral will be Noon, Saturday, November 21, 2020 in Phelps Funeral Chapel 311 Hope Drive Winchester, VA officiated by Pastor Johnnie Brewer. Burial will be in St. John's Lutheran Church Cemetery in Frederick County. Friends will be received from 10-12:00 prior to the service in the funeral home.

Elwood Richard Brewer, 84, of Winchester passed away Saturday, November 7, 2020 in his Daughter's home in Pennsylvania surrounded by her and his Loving Family. He was born September 24, 1936 in Winchester, Va. the son of Floyd and Ada Ritenour... View Obituary & Service Information

The family of Elwood Richard Brewer created this Life Tributes page to make it easy to share your memories.