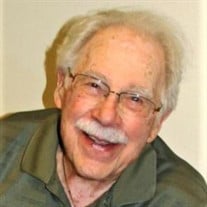 Our Father, Charles Zuckerman, 96, left this world on December 25 to reunite with his Bride of nearly 73 years, Virginia. Dad never met a stranger and lived his life to serve others and spread joy wherever he went. He had a twinkle in his eye and a quick wit to the very end. As a true gentleman and selfless individual, raised by Russian immigrants who settled in Winchester, he touched more lives than even he realized. After graduating from John Handley High School in 1942, Charles served in the US Army Air Corps from 1943 to 1946. He and his four brothers survived WWII and returned home to assist their father in his scrap business. Dad retired in 1988 as President of Charles Zuckerman and Son. During his lifetime, he was a member of the Elks Club, the Patsy Cline Committee, the Winchester Host Lions Club for 67 years, past Chair of the American Red Cross, Past Commander of the American Legion, past Board Member of the Free Medical Clinic, Winchester Medical Center, and the Chamber of Commerce, past member of the Shenandoah University Board of Trustees, past President and founding member of Beth El Congregation, Mayor of Winchester, VA from 1980 – 1988, and a member of City Council for 16 years before he was elected Mayor. Still known to many as Mayor Zuckerman, he was passionate about donating blood (having donated 38 gallons himself) and encouraging others to donate. He continued to volunteer at bloodmobiles after a cancer diagnosis halted his ability to donate. He loved helping out at the Area Food Bank, the Adult Care Center, and walking to raise money for Big Brothers/Big Sisters. His wife of 72 years, Virginia, predeceased him, as well as his loving parents, Louis and Celia, three sisters, and four brothers. He is survived by his six children, Steve (Judy), Caz, Phil (Linda), Don, Kitty, Ann, seven grandchildren, and seven great-grandchildren. A private memorial service will be held, and donations may be made to The American Red Cross, Beth El Congregation, or the Shenandoah Valley Westminster-Canterbury Foundation.

Our Father, Charles Zuckerman, 96, left this world on December 25 to reunite with his Bride of nearly 73 years, Virginia. Dad never met a stranger and lived his life to serve others and spread joy wherever he went. He had a twinkle in his eye... View Obituary & Service Information

The family of Charles Manuel Zuckerman created this Life Tributes page to make it easy to share your memories.

Our Father, Charles Zuckerman, 96, left this world on December...