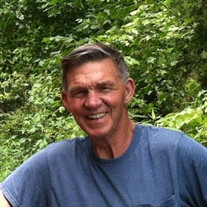 Charles (Bake) Edward Kerns, 76, of Pall Mall, TN, formerly of Winchester, VA, was called to Heaven Wednesday, August 8, 2018. He was born March 31, 1942, in Winchester, the son of Russell Irving and Alma Perry Kerns. He was married to Georgia Anna Coffelt Kerns, the Love of his Life, for 53 years until her passing on February 27, 2017. Charles received his Life’s Calling to the Fire and Rescue Service at the age of 13 with the Shawnee Volunteer Fire Department. He held many responsibilities within the station, excelling to the rank of Fire Chief. He was extremely proud of the station’s many achievements. In 1974, he was employed by the Fairfax County Fire and Rescue Department, serving the McLean and Chantilly VA. area. While serving in Fairfax from 1978-1997, he attained the rank of Station Officer. His achievements include the Silver Medal Public Safety Valor Award and a Lifetime Membership to Fairfax City Volunteer Fire and Rescue. He continuing his faithful stewardship to his calling, as a member of the Winchester Rescue Squad, which later became the Millwood Fire and Rescue Department. Additionally, he served our country for 29 years. He was in the Stonewall Brigade, 116th Infantry Division of the Army National Guard as a Medical Specialist. He also served with the Martinsburg Air National Guard as an Assistant Fire Chief of Operations retiring at the rank of Master Sergeant. Following his “Retirement”, Charlie moved his family to Pall Mall, TN. He volunteered with the Fentress County Fire Department and Government. for 20 years. He served as a Fire Instructor at the Tennessee Fire Service and Codes Academy, and was a lead instructor for the State of Tennessee and the surrounding counties of Fentress. He served at the rank of Captain of Pall Mall Volunteer Fire Department. He lead efforts to provide over 2 million dollars worth of fire equipment, apparatus, and training for Fentress and surrounding counties. Charlie was recognized by a House Resolution for these actions by the State of Tennessee House of Representatives and Governor. Charlie, who was forever humble, would always reply, “I did not do this; The Lord let us do this”. Charlie will be dearly missed. His unshakable leadership and unselfishness to help, protect, and provide for others will forever remain with us. He is survived by his sons, Russell "Tater" Kerns, and Brandon Kerns; his daughters, Kristle Kerns and Pamela Baker; sisters, Alma "Sis" Gaunt, and Maxine "Mackie" Kerns; eight grandchildren, two great-grandchildren and many nieces, nephews and cousins; as well as, his “Brothers” Charles Brown, Terry Braithwaite and members of the Fire and Rescue Brotherhood, and his four- legged pals, Turdypye and Grumman. A service will be 11:00 a.m. Thursday in Shawnee Volunteer Fire and Rescue Department 2210 Valor Drive Winchester officiated by Reverend Jeff Barbour. Burial will be in Macedonia Cemetery, White Post. Casket Bearers will be Jay Bailey, Robbie Bailey, Tyree Cather, Scott Miller, J.D. Tomblin, Chase Kerns, and Russell Kerns. Honorary Bearers are Charlie Brown and Terry Braithwaite. Friends will be received Wednesday from 6-9:00 p.m. in the fire station. In lieu of flowers, memorials may be made to the Firefighter Cancer Support Network at: www.FSN.net Following the burial, a reception will be held at Shawnee Volunteer Fire and Rescue Department.

Charles (Bake) Edward Kerns, 76, of Pall Mall, TN, formerly of Winchester, VA, was called to Heaven Wednesday, August 8, 2018. He was born March 31, 1942, in Winchester, the son of Russell Irving and Alma Perry Kerns. He was married to Georgia... View Obituary & Service Information

The family of Charles Edward Kerns created this Life Tributes page to make it easy to share your memories.