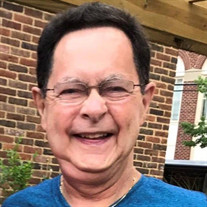 Charles Gary “Butch” Eaton, 70, of Winchester, died Sunday May 13, 2018 at his residence. He was born July 6, 1947 in Martinsburg, WV the son of Charles Elijah and Mamie Guenther Eaton. He was married to Barbara A. Eaton. He graduated from John Handley High School in 1965 and then served in the US Navy. In 1975, he graduated from the Medical College of Virginia School of Pharmacy and retired in March, 2016 from Winchester Medical Center as a staff pharmacist. He attended the Fellowship Bible Church. Surviving in addition to his wife are a son, Kristopher Eaton and his wife Lisa of Winchester; a daughter, Sarah Williams and her husband Joel of Winchester; a grandchild, Kiley Eaton; two sisters, Shirley Guess of Winchester and Missy Eaton Turner and her husband Dan of Lake Wylie, SC and a brother, David Dennis of Arizona. Two brothers, Scott Eaton and Nelson Dennis, are both deceased. A funeral service will be Friday at 11:00 a.m. in Phelps Funeral Chapel, 311 Hope Drive, Winchester with Evangelist James E. McDaniel, Jr. officiating. Burial will follow in Mt. Hebron Cemetery. Casket bearers will be Joel Williams, Jeff Eaton, Richard Newcomer, John Newcomer, David Newcomer and Mike Hamilton. Friends will be received on Thursday from 7:00 p.m. until 9:00 p.m. in the funeral chapel. Memorials may be made to Blue Ridge Hospice, 333 W. Cork Street, Winchester, VA 22601 or to Support For People With Oral, Head & Neck Cancer, spohnc.org.

The family of Charles "Butch" Gary Eaton created this Life Tributes page to make it easy to share your memories.