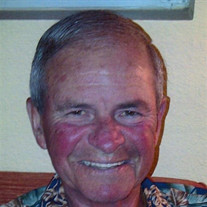 Charles Albert "Porky" Anderson, Jr. passed away Wednesday, January 27, 2016 in Winchester Medical Center. He was born November 10, 1942 in Winchester, the son of Charles Sr., and Pauline Garber Anderson. He was married to Kathleen M. Anderson for 33 years. Porky graduated from Handley High School where he was co-captain of the 1960 football team. Professionally, he owned Sunnyside Plaza Dry Cleaners and was a partner in the North American Breeders, where he raised purebred cattle. His most recent position was at Miller Honda as a sales associate. He was a member of the Loyal Order of the Moose and the Judges Athletic Association. His hobbies included working in his yard and planting flowers with his beloved dogs Neko, Bailey, and Daisy. In addition to his wife, he is survived by children, Amy Thomas and her husband Jeremy, Erin Thomas and her husband Justin, Charles Anderson III, Julie Cotterell and her husband Chris, all of Winchester; three grandchildren, Ava Thomas, Colin Thomas, and Peyton Cotterell; a brother, James T. Anderson; a nephew, J.T. Anderson, and a niece, Heather Bowen. A funeral will be 11:00 a.m. Tuesday in the Phelps Funeral Chapel, 311 Hope Drive, Winchester. Burial will follow the service in Mt. Hebron Cemetery. Casket Bearers will be Denny Carper, Justin Thomas, Jeremy Thomas, Rob Davies, Kurt Meier, and Jimmy Anderson. The Honorable Bearer will be Bob McIntire. The family will receive friends Monday from 6-8:00 p.m. in the funeral home. In lieu of flowers memorials may be made to the Ester Boyd Animal Shelter 161 Fort Collier Rd. Winchester, VA 22601.

The family of Charles "Porky" Anderson Jr. created this Life Tributes page to make it easy to share your memories.