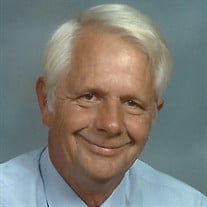 Walter Dale Johnson, Jr., 63, of Martinsburg, WV, formerly of Winchester, VA died Sunday, June 8, 2014 in Canterbury Center, Shepherdstown, WV. He was born June 2, 1951 in Winchester the son of Walter Dale Johnson, Sr. and Bettie Jane McKee Johnson. He was married to Dorothy M. “Dottie” Johnson. Mr. Johnson had been the owner/operator of Final Touch Auto Repair and a member of the Valley Cruisers. Surviving in addition to his wife are a stepdaughter, Racheal Parker and Marcus Via of Martinsburg and their children Kimberly and Mackenzie; a stepson, Paul C. Parker, Jr. and his wife Sherry of Bunker Hill and their daughter Emily; two daughters, Misti Howell and Chanda Young both of Winchester; a sister, Jennifer Lewis and her husband Steve of Winchester; a nephew, Todd Lewis of Bumpass, VA and two nieces, Christi Ray-Sulser and Heather Ray both of Winchester. Two brothers, Harry Johnson and Ronnie Johnson, are both deceased. A memorial service will be Thursday, June 12, 2014, 3:00 p.m. in Greensburg United Methodist Church, 2171 Greensburg Road, Martinsburg with Dr. Edward Grove officiating. Interment will be private in Mt. Hebron Cemetery, Winchester. Friends will be received on Thursday from 1:00 p.m. until the time of the service in the church. In lieu of flowers, memorials may be made to Hospice of the Panhandle, 122 Waverly Court, Martinsburg, WV 25403. Arrangements are by Phelps Funeral & Cremation Service, Winchester. www.phelpsfunerals.com

The family of Walter Dale Johnson Jr. created this Life Tributes page to make it easy to share your memories.