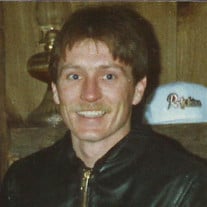 Thomas Allen Wright, 58, of High Point, NC formerly of Winchester, VA died Monday, October 16, 2017 in High Point Regional Medical Center. He was born October 26, 1958 in Winchester the son of Thomas Wright and Barbara Orndorff. He has been married to Julia Wright for 26 years. Professionally, he worked as a truck driver. He was a member of Deep Creek Church of Christ. He was a devoted father and he loved fishing, NASCAR, dirt track racing, and the Washington Redskins. In addition to his wife, he is survived by his children, Gus, Elora, Jacob, and Julian; siblings, Clinton Wright and his wife Teresa of Stephens City, VA, Chuck Wright and his wife, Gloria of Hedgesville, WV, and Tracey Dove of Strasburg; many nieces, nephews, great-nieces, and great-nephews. A funeral will be 11:00 a.m. Monday in the Phelps Funeral Chapel 311 Hope Drive Winchester officiated by Reverend David Calloway. Burial will be in Shenandoah Memorial Park with Brandon Wright, Derek Wright, Gus Wright, Jacob Wright, Chuck Wright, and Clinton Wright, serving as Casket Bearers. Friends will be received on Sunday from 7-9:00 p.m. in the funeral home.

The family of Thomas Allen Wright created this Life Tributes page to make it easy to share your memories.