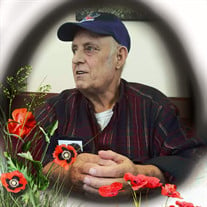 Stephen David Mauck, 69, of Winchester, died Saturday, September 8, 2018 in Winchester Medical Center. He was born October 6, 1948 in Winchester the son of Stanley, Sr., and Anna Paugh Mauck. He was married to Joyce Hamilton Mauck for 53 years. Professionally, he had worked for Perry Engineering until his retirement. He was known as a story teller, and in his spare time enjoyed WWF wrestling, Westerns, and being a handy man. In addition to his wife, he is survived by his children, Stephen Mauck of North Carolina, and Kimey Shreve of Winchester, six grandchildren; five great-grandchildren; siblings, Jennifer Moreland and her husband Roger of Paw Paw, WV, Stanley Mauck, Jr., and his wife, Mary of Winchester, Ernest Mauck and his wife, Pat of Buena Vista, Roberta Van Weinen of Bayse, Andrea Mauck of Winchester and a large extended family. His brother, Harold W. Mauck preceded him in death. A funeral will be 2:00 p.m. Thursday in Shenandoah Memorial Park.

The family of Stephen David Mauck created this Life Tributes page to make it easy to share your memories.