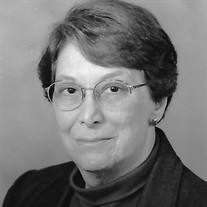 Shirley Echelman (84) died on Thursday, May 2, 2019 at Blue Ridge Hospice in Winchester after a long battle with cancer. Her sister Judith Gimple, step-son Cyrus Robertson, and her many friends helped her through the final months. She was born in Omaha, Nebraska, to immigrant parents Rose (née Ricks) and Nathan Gimple and was the first woman in either her maternal or paternal families to graduate from college, receiving a BSc in Economics from Omaha University and an MA in Library Science from Rutgers University. Her distinguished career began when she was hired as a Junior Economist at Basic Economic Appraisals. She was the only woman economist and there were all these books so she was asked to “bring some order to the library.” After doing that for a couple of years, she decided to go back to school and get a Masters in Library Science. This led to a position as Director of Information Services at Chemical Bank New York Trust Company, then as Executive Director of the Medical Libraries Association, and finally as Executive Director of the Association of Research Libraries, the latter an organization representing all of the major research libraries in the United States and New York and Boston Public Libraries. While she was still at Chemical Bank, Shirley served as President of Special Libraries Association and became an important activist in the library world. Shirley was a member of the White House Conference on Libraries and Information Services in 1979 and served on the Board of Regents at the National Library of Medicine in the 1980s. In 1988, when she retired from association work, she first served as interim librarian of the Smithsonian research library in Panama while they searched for a permanent head. On her return to the United States, she moved to Clarke County and became a consultant in library management. Ever full of energy, she volunteered at Handley Regional Library because she enjoyed reference work. This led to a position as Adult Services Librarian at Handley Library from 1991 to 2001, retiring after project managing the building of Bowman Library in Stephens City. Then still full of energy, she took on the library at Holy Cross Abbey, acting as Assistant Librarian for seven years. She had lost her heart to the Shenandoah Valley, especially Winchester and Frederick and Clarke Counties. Along with husband Martin Robertson and his son Cyrus, she remained even after full retirement. She filled her retirement years with service on the Boards of the Shenandoah Area Agency on Aging and the Winchester Little Theatre where she also managed the box office for many years. All in all, Shirley was an asset to her community, a willing, nay eager, member and worker for local groups such as Torch, the Winchester Little Theatre, and Beth El Congregation in Winchester. She will be missed by all who were fortunate enough to know her. A Celebration of Life will be held at 5:00 p.m. Wednesday, May 29, 2019 in Handley Regional Library. No flowers, please. Memorial contributions may be made to Beth El Congregation, 520 Fairmont Avenue, Winchester, VA 22601, and Blue Ridge Hospice, 333 Cork Street, Winchester, VA 22601.

Shirley Echelman (84) died on Thursday, May 2, 2019 at Blue Ridge Hospice in Winchester after a long battle with cancer. Her sister Judith Gimple, step-son Cyrus Robertson, and her many friends helped her through the final months. She was... View Obituary & Service Information

The family of Shirley Tobie Echelman created this Life Tributes page to make it easy to share your memories.