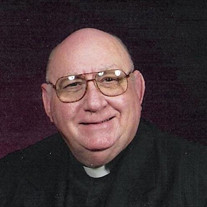 Reverend Rogers Staton Laudermilk, 76, of Stephens City, formerly of Covington, VA, died Tuesday, December 24, 2013 in Front Royal. He was born February 4, 1937 in Covington, VA the son of Berlin Ashby Laudermilk and Wilma Kessinger Laudermilk. He was preceded in death by his father and mother. Survivors include his wife of 55 years, Katherine B. Laudermilk; a son, John Wesley Laudermilk and his wife Kathy of Stephens City; a granddaughter and the love of his life, Elizabeth “Beth” Laudermilk of Chesterfield, VA and a brother, Wayland A. Laudermilk and his wife Patty of Eagle Rock, VA. Rev. Laudermilk worked as a quality control technician at General Electric in Waynesboro, VA for a number of years. He then worked in automobile sales before completing the Weaver School of Real Estate and pursuing a successful career in real estate prior to being called to the ministry. He became an ordained elder in the United Methodist Church. He served numerous charges in several districts of the Virginia Conference. Some of his accomplishments include serving on several building projects and serving on the Camp Overlook Board for a number of years. Rev. Laudermilk graduated from Longwood College in Farmville, VA with degrees in history and education. He also graduated from Duke University School of Divinity in North Carolina. He was involved in emergency services starting as a member of the Waynesboro First Aid Crew in the 1960’s. He served with the Buckingham Volunteer Rescue Squad and finally as a member and chaplain with the Stephens City Volunteer Fire and Rescue Company. Rev. Laudermilk had many interests including amateur radio, holding a general class license with the FCC issued call sign W4CKY. He enjoyed history in any form. He particularly liked vintage aircraft, often reading about them and touring them when they were on display. He enjoyed the outdoors including hiking, camping and just going for long walks. He most recently enjoyed his retirement and spending time with his family. A funeral service will be Monday, December 30, 2013, at 11:00 a.m. in Little Mountain United Methodist Church, (just off Cedar Grove Road), Frederick County, VA with Rev. Philip Brumback, Rev. Eugene Thomas and Rev. Tommy Crosby officiating. Burial will follow in the church cemetery. In lieu of flowers, memorials may be made to the Little Mountain United Methodist Church Handicapped Lift Fund, c/o Mrs. Mary Borror, 710 Cedar Grove Road, Winchester, VA 22603. Arrangements are by Phelps Funeral & Cremation Service, Winchester.

The family of Rev. Rogers Staton Laudermilk created this Life Tributes page to make it easy to share your memories.