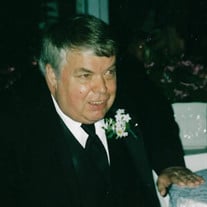 Robert “Butch” Campbell, Sr, 76 of Winchester, VA went to be with his Lord and Savior on Wednesday, June 2, 2021. He was born March 7, 1945 in Winchester the son of Paul Sr., and Eunice Bell “Bessie” Clowser Campbell. He attended James Wood High School and was a member of the Rouss Drum and Bugle Corps. He enlisted in the US Navy in 1963 and worked on the USS Donner. In 1965, he married the love of his life, Sandra “Sandy” Ritter and spent 55 wonderful years with her. Professionally, he worked at Crown Cork and Seal and retired after 36 years. In addition to his wife, he is survived by his sons, Robert “Bobby” Campbell, Jr. and wife Rachel, Timothy “Tim” Campbell and wife Patty; grandsons, Robert “Robbie” Campbell III and Brandon Campbell, a brother, Garland Campbell; sisters, Martha Lou Light, Alice Giles, Carolyn Anderson, and Sharon Thompson; and also special friend and brother-in-law, Bobby Giles. He also leaves his loving fur babies, cats: Liam and Athena. He was preceded in death by his parents, grandparents Hollis and Myrtle Clowser; brothers, Paul Jr., and Ben Campbell and sisters Joyce Sirbaugh, Charlotte Paugh, and Barbara Eye. A funeral will be 1:00 pm Monday in Lighthouse Baptist Church 2581 Northwestern Pike Winchester, VA 22603, officiated by Pastor Howard Caldwell and Pastor David Martin. Burial will be in Shenandoah Memorial Park with Terry Wolverton, Mark Owens, Brandon Campbell, and Robbie Campbell serving as casket bearers. Friends will be received an hour prior to the service. In lieu of flowers, donations can be made to Lighthouse Baptist Church at the above address.

The family of Robert Allen "Butch" Campbell Sr. created this Life Tributes page to make it easy to share your memories.