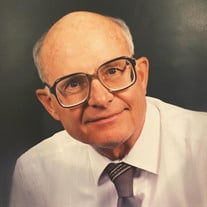 Richard Paul “Dick” Kleffman, 85, of Stephens City died Friday, May 8, 2020 at Lynn Care Nursing Home in Front Royal, Virginia after a long battle with Parkinson’s Disease and Dementia. He was born on October 14, 1934 in Granite City, Illinois, the son of Herbert and Pauline Kleffman, who preceded him in death. He was also preceded in death by his spouse of 57 years, Martha Rose “Marty” Kleffman. He graduated with his Masters Degree from Washington University of St. Louis in 1959. He briefly worked for AT&T before beginning his long career as a civil servant working for the United States government in various agencies. The assignments he enjoyed the most were with the US Department of State when he and the family were stationed at various US Embassies. These assignments sparked an interest in outdoor activities of skiing and hiking. In 1992, he retired from government service and moved to Park City, Utah where he and Marty enjoyed the local skiing and hiking. They served the Park City community via the Ambassadors Club and the Park City United Methodist congregation. As his Parkinson ’s disease progressed, he and Marty moved back to Virginia in 2012 to be near family and he became a faithful member of Stephens City United Methodist Church. In 2016, he was admitted into Lynn Care Nursing Home in Front Royal due to the complications of Dementia and Parkinson’s. He is survived by his sons: Richard Kleffman, Jr. and his wife Leanne of Ashburn, Greg Kleffman and his wife Candice of Stephens City; Tom Kleffman of Middletown; grandsons Hunter Kleffman and his wife Callie and their son Casey; Stephen Kleffman and Conner Kleffman; his sister Nancy Kaeppel and her husband Bill; and many nieces and a nephew. The funeral will be held on Friday, May 15 at 11:00AM EST at Stephens City United Methodist Church officiated by Pastor Robert Schoeman. Due to Covid-19 restrictions only immediate family members will be allowed into the church. However, all our family and friends are invited to live stream the funeral service via the Stephens City UMC Facebook page at: https://www.facebook.com/StephensCityUMC/ In lieu of flowers, memorials may be made to Lynn Care Center, Shenandoah Park Lane Activities, 1000 N. Shenandoah Ave., Front Royal, VA 22630 or to Stephens City United Methodist Church, P.O. Box 428, Stephens City, VA 22655.

The family of Richard Paul "Dick" Kleffman created this Life Tributes page to make it easy to share your memories.