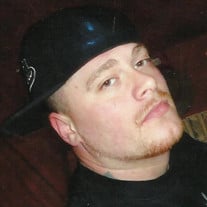 Ralph Allen Richards, 32, of Winchester, VA passed away on Friday, August 2, 2019 in Winchester Medical Center. He was born August 14, 1986 in Winchester the son of Ralph Ashley and Ann Richards Anderson. Mr. Richards married Desiree Coffey on May 14, 2011. Ralph was the owner of Als Autoworks. In his spare time he enjoyed the thrill of motorcycles, music, and the outdoors. In addition to his wife and mother, he is survived by two children, Devin and Jada Richards; brother, Joshua Richards, grandmother, Helen Richards, his Uncle, who was like a father to him, Jimmy Richards and his wife, Christina; aunt, Tammy Richards, many cousins and a large extended family. A service will be 11:00 Saturday in Phelps Funeral Chapel 311 Hope Drive. Burial will follow the service in Shenandoah Memorial Park. Casket Bearers will be Jimmy Richards, Dallas Richards, Dexter Sloane, Austin Wysong, Devin Richards, Josh Richards, and Shadrick Crowder. Honorary Bearers will be Jacob and Tyler Jones and Travis Smith. Friends will be received Friday 7-9:00 p.m. in the funeral home. In lieu of flowers, memorials may be made to Mrs. Desiree Richards 2230 Berryville Pike Winchester, VA 22603.

The family of Ralph Allen Richards created this Life Tributes page to make it easy to share your memories.

Ralph Allen Richards, 32, of Winchester, VA passed away on Friday,...