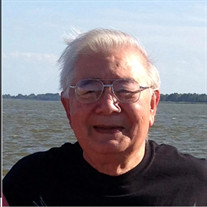 Nicholas Vienbenito Magtutu, 87, of Chesapeake Beach, MD died Tuesday, December 31, 2019 in Anne Arundel Medical Center, Annapolis. He was born September 24, 1932 in Washington D.C. the son of Gervasio and Kyriakitcha Piosta Magtutu. He was married to Jay Knapp Magtutu for 67 years. Mr. Magtutu was a retired from the US Army as a Master Sergeant. After his service, he worked for the Litton Industries in Electronics Engineering. In his spare time, he enjoyed woodworking and time with his family. In addition to his wife, he is survived by his children, Margo Magtutu-Zollars of Chesapeake Beach, MD, Michael Scott and his wife Shawna of Tennessee, and Gregory Magtutu and his wife, Loree of Port Republic, MD; grandchildren, Jay Zollars, Michael Magtutu, Jr., Crystal, Lisa, and Nicholas Magtutu; great-grandchildren, Davion, Aalayah, Dakota, Devin, Dustin, and Bryden, and a large extended family. The family will receive friends in Rausch Funeral Home 8325 Mt. Harmony Ln. Owings, MD on Tuesday, January 7, 2020 from 3-5:00 p.m. and 7-9:00 p.m. A funeral will be in Arlington National Cemetery 12:45 p.m. Thursday, February 5, 2020.

The family of Nicholas Vienbenito Magtutu created this Life Tributes page to make it easy to share your memories.