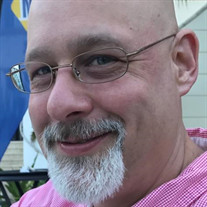 Michael William Jordan, 49, of Stephens City passed away suddenly Sunday, August 22, 2021 at Winchester Medical Center. Mike was born September 18, 1971 in Pittsburgh, PA the son of William and Sharon Empfield Jordan. He was married to Tamala Bennett Jordan for 19 wonderful and dedicated years. He was a 1989 graduate of James Wood High School. Professionally he is well known as the owner/operator of MOTION AUTO PARTS of Stephens City, VA. He was beloved and respected by many to include: employees, customers and peers. With his compassion and willingness to help others he became close friends with many through the years. Mike will be remembered for his knowledge and resourcefulness in the auto parts industry. More recently he was a coordinator at Kraft Heinz where he used those same skills to promote positivity and a sense of responsibility to do the best job you can. He loved learning new things and was grateful to have been employed by them. He attended Abundant Life Church. He was a lifetime member of the NRA and was a true Patriot who loved God and Country In his spare time, he enjoyed NASCAR, hunting, traveling, camping and spending time with family and friends. Any trip to the beach was a favorite of his, but the simplest of things like sitting in his recliner with his beloved pets watching his favorite shows brought him great joy. In addition to his wife, he is survived by his children, son Justin Jordan (Brittany); grandchildren Brayden and Oaklynn; daughter, Hannah Gosnell and pets Mimi and Annie aka “Linda” Father William Jordan, Brothers Mark Jordan, David Jordan (Jaime) and Donald Jordan; brothers in-law David Bennett (Jill), William Bennett (Tina); sisters in-law Debbie Bennett (Phil) and Karen Harris (Randy) and many loving nieces and nephews. He was preceded in death by his mother Sharon Empfield Jordan, In-laws Edward and Catherine Bennett, Sister in-law Kimberly Jordan. A Celebration of Life will be at 7:00PM Thursday, September 2, 2021 at Phelps Funeral Chapel, 311 Hope Drive Winchester, VA officiated by Pastor Jeff Barbour. Friends will be received an hour prior to the service. In lieu of flowers memorials may be made to Blue Ridge Hospice, 333 W. Cork Street Winchester, VA 22601.

The family of Michael William Jordan created this Life Tributes page to make it easy to share your memories.