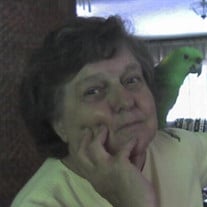 Marilyn M. Steere,82. Born in Hartford, Connecticut in 1934 to Merrill and Mary LeGeyt, Marilyn was raised in the town of Wickford, RI where she graduated from High School, participating in sports and was a majorette. She met her future husband, Clarence (Bud) Steere of 62 yrs, in High School, where she “scared him to death,” as he recalled, in the open water of the bay sailing under the Jamestown Island Bridge looking into the Atlantic Ocean. After Nursing College in Hartford Conn, she moved to Herndon in Northern VA where her husband’s job was at the new Dulles Airport. Marilyn was instrumental in Information Systems, converting the Loudoun Public Library System to computer from paper and she stayed with library administration until retirement in the 1990’s. When she and Bud moved to Winchester VA, they expanded the family business of raising exotic birds. They started the Tri-State Bird Club, and belonged to the Apple Valley Garden Club supporting projects as the Patsy Cline House, Evans Home for Children and Blue Ridge Hospice. Her last year, though bound by a wheel chair, was still as full as her children and grandchildren could make it, while keeping her in her home with her cats, and parrot Morgan. Recovering from surgery, her mind still was sharp at times, events and dates we had spent together. She died quietly at home with her sons and their wives and children, grandchildren. She leaves her sons Michael (Karen), Bruce (Kathy), Jeff (Celina), Eric (David) and a daughter, Julie Clevenger; eighteen grandchildren, Tim, Pam, Jenna, Ann, Karen Elizabeth, Rebekah, Nancy, Joshua, Jaclyn, Jeff Jr., Paul, Alex, Estelle, Trent, Troy, Austin, Hagen and Laurel.  She has sixteen great-grandchildren and three great-great grandchildren. The family thanks the efforts of Drs. Sherry Schott, T. Gibbs, Choi, the Valley Home Health entire group including therapists, Paula, Jim, Jeff, Chad and nurse Diana Stump  who showed great care as mom made progress after her strokes and the group from Blue Ridge Hospice with Dr. Flynn, Nurse Barbara, Angela and especially Mom’s Aid Peggy. There will be a celebration of life at a later date. Donations to Blue Ridge Hospice in Marilyn’s name will be put to great use. Please e-mail comments to the family using the following link: [email protected]

Marilyn M. Steere,82. Born in Hartford, Connecticut in 1934 to Merrill and Mary LeGeyt, Marilyn was raised in the town of Wickford, RI where she graduated from High School, participating in sports and was a majorette. She met her future husband,... View Obituary & Service Information

The family of Marilyn M. Steere created this Life Tributes page to make it easy to share your memories.