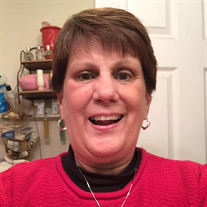 Linda Gail (Almond) McDaniel, 63, of Winchester died Friday, March 23, 2018 in Blue Ridge Hospice Inpatient Care Center from complications of ALS. She was born September 16, 1954 in Washington D.C. the daughter of the late Charles Sr. and Marjorie Hill Almond. She lived most of her childhood in the Stafford County VA area before moving to Salem, VA. She graduated from Andrew Lewis High School in 1972. She continued her education at Bluefield College where she received her associate degree in 1974. She was named homecoming queen that year. She then entered Averett College (now Averett University) and graduated with honors in 1976 with a degree in Business. There she met Ted G. McDaniel, whom she married June 12, 1976 in Salem VA. She attended Happy Creek Primitive Baptist Church and was a strong believer in Jesus Christ as the savior of His people. She loved going to Church, singing the Church Hymns and the sweet fellowship with the Church members. She enjoyed volunteering for Frederick County Public Schools, the Free Medical Clinic and the Girl Scouts of America. She was also a blood donor, donating several gallons of blood over her lifetime to the American Red Cross. She participated in the Winchester Adult Spelling Bee and was an avid Redskins fan. She owned several Redskin jerseys, shirts, pajamas, socks, pants and jackets. She enjoyed travelling and especially loved going to Hawaii. She was known for her infectious smile and her willingness to help others. She was excellent in working with computers and was employed by Averett University, Dan River, Inc., S.A.I.C. Winchester Medical Center and New Hanover Medical Center all as a programmer analyst/systems specialist. In addition to her husband, she is survived by her children, Michelle Caton and her husband Dwayne, and Morgan McDaniel and his wife Amy, all of Winchester; five grandchildren, Isaiah, Prestonn, & Colt Caton, Jaden Walls, and Savannah Boczar; a sister, Toni Rawlings and her husband Mike of Stafford, and her chosen family; Barbara Holstein and her sons, Michael, Mark, & Milan Gordon, and Kristen Holstein. She also is survived by numerous nieces and nephews. She was very fond of them and always made time to be part of their lives Her siblings, Roger, Donald, and Charles Almond, Jr., Patricia Blount, & Gay Germain, as well as her chosen father Benjamin Holstein, Jr. all preceded her in death. A funeral will be 11:00 a.m. Thursday in Phelps Funeral Chapel 311 Hope Drive with Elder Gary Utz officiating. Friends will be received Wednesday from 7-9:00 p.m. in the funeral home. In lieu of flowers, memorials may be made to: Blue Ridge Hospice at 333 West Cork Street, Suite #405, Winchester VA 22601.

The family of Linda Gail McDaniel created this Life Tributes page to make it easy to share your memories.