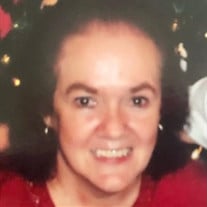 Linda Nichols Gibson Martinez, 73, passed away peacefully on Monday, July 5, at her home after a seven-year courageous battle with leukemia. She was born to Virginia L. Nichols in Winchester and raised by her mother and grandparents, Wheeler and Gertrude Nichols, and later by her mother and stepfather, James G. Baker. She graduated from John Handley High School in 1966 and married James H. Gibson in 1966. She was a homemaker for many years raising her four children; Todd, Jackie, Patrick, and Tim, and babysitting many children through the years. She and her first husband later owned and managed several small grocery stores, including Mac’s Market in Purcellville, and Gibson’s Grocery I and II, and J&L Mini Mart in Winchester. After her divorce, she worked for 25+ years at Quick Stop, which later became Throx convenience store. In 1991, she met her second husband, Juan G. Martinez. They married in 1996 and she helped with his Martinez Stonework business until his passing in 2012. She loved her customers, including many repeat customers that she served regularly. She stopped working in 2019 due to her health issues and missed her customers dearly. She enjoyed reading, watching certain TV shows, farmers markets, traveling, and simply spending time with her children, grandchildren, family, and friends. Her children and grandchildren were always her main focus. A dear friend recently said, “Linda and Juan’s home was always full of family and love.” She is predeceased by a son, James Todd Gibson; her husband, Juan G. Martinez; her parents, Virginia and James Baker; and a sister, Shirley Drummond. She is survived by her children, Jackie Gibson Griggs (Ken), Patrick Gibson, and Tim Gibson (Corrie); her five grandchildren, Taryn Gibson, Dylan Gibson, Taylor Gibson, Andrew Griggs, and Teagen Gibson; her first husband, James H. Gibson; a brother, Dennis Nichols, and two sisters, Nancy Johnson and Brenda Day; and numerous nieces and nephews. A Celebration of Life service will be held Saturday, July 17, 2021 from 3:30 p.m. to 5:30 p.m. at Marker-Miller Orchards. Please bring any memories or stories about Linda to share with her family and friends. A graveside burial at Shenandoah Memorial Park will be private. Her family would like to thank Blue Ridge Hospice, Phelps Funeral Home, and Marker-Miller Orchards. Arrangements are by Phelps Funeral & Cremation Service.

Linda Nichols Gibson Martinez, 73, passed away peacefully on Monday, July 5, at her home after a seven-year courageous battle with leukemia. She was born to Virginia L. Nichols in Winchester and raised by her mother and grandparents, Wheeler... View Obituary & Service Information

The family of Linda Nichols Gibson Martinez created this Life Tributes page to make it easy to share your memories.