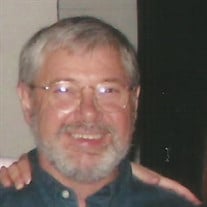 Lewis Walter Jenkins, 67, of Clear Brook died Tuesday, October 12, 2021 in Winchester Medical Center, surrounded by family. He was born April 23, 1954 in Winchester the son of the late Leslie and Nina Affleck Jenkins. He graduated James Wood High School, class of 1975. He attended Brucetown United Methodist Church. Professionally, he had worked in Clear Brook Shopping Center, Bill Morrison Excavating and for 33 years, at Henkel-Harris Furniture Company. Lewis's love of dirt track racing started while working on the #22 race team of Bill Morrison. He went on to work with other teams to include #72 Roger Jenkins, #69 Ron Lee, and #88 Kris Holliday. He formed the #19 race team for his brother Blaine and the #19 Quarter Midget team for nephew Sam. These race teams reinforced the strong family bond that he loved so much. His other passion was playing Santa and bringing joy to all of his nieces and nephews. He is survived by his siblings, Terry Bouck and her husband, Kyle, Blaine Jenkins, and his wife, Donna all of Clear Brook, and David Jenkins and his significant other, Angela Bean of White Hall; nieces, Stephanie Davis, Savannah Grant, Rachel Davis, and Hillary King; nephews, Samuel Jenkins, Derek and Dane Bouck; five great-nieces, and five great-nephews. A service will be 12:00 p.m. Saturday in Phelps Funeral Chapel 311 Hope Drive Winchester officiated by Pastor Raymond Morton. Burial will be in Shenandoah Memorial Park. Casket Bearers will be Ronnie Jenkins, Gary Jenkins, Ron Lee, Roger Jenkins, Kris Holliday, and Buck Silvious. Friends will be received an hour prior to the service in the funeral home. In lieu of flowers, memorials may be made to Brucetown United Methodist Church at 2161 Brucetown Rd. Clear Brook, VA 22624.

The family of Lewis Walter Jenkins created this Life Tributes page to make it easy to share your memories.