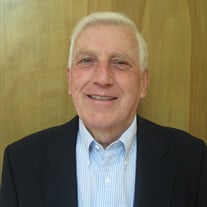 Larry Delano Matthews, age 84, of Winchester, VA, died from prostate cancer at his home on December 18th, 2018. Mr. Matthews is survived by his wife of 51 years of marriage, Annemarie Hirsch Matthews, of Austria. He is also survived by his son, David C. Matthews and daughter, Natalie Matthews Hamm. He has 3 grandchildren, Mari (9), Charlie (7) and Sophia (5) He was born in 1934 in Huntington, WV, the son of Claude L. Matthews and Madge Lester Matthews, both of Wayne County, WV. He lived in Huntington, WV where he graduated from East High School in 1952. He attended Marshall University for 2 years and then joined the U.S. Air Force as a pilot for 5 years, before returning to Marshall University and graduating in 1962 with a Masters Degree in Political Science. During his college years Mr. Matthews was an active member and officer in the Sigma Phi Epsilon fraternity, where he made many lifelong friends. As a lifelong aviation and military enthusiast, he served in the Civil Air Patrol, Army ROTC, Air Force, Air National Guard (West Virginia and Puerto Rico), and the Air Force Reserve. He gave 22 years of service to his country and retired as a Lieutenant Colonel. During that period, he flew the RB-47 (reconnaissance), HU-16 (amphibian special operations), and the F-86 (fighter). In his final years with the military he was a Public Information Officer at Andrews Air Force Base, MD. Mr. Matthews’ interest in aviation led him to a civilian career as a commercial airline pilot with Pan American World Airways (PAN AM). He had the opportunity to live in New Zealand, Hong Kong, Berlin, Mexico City and Portugal on temporary assignments with PAN AM. The majority of his airline career involved flying out of Miami and New York City. He flew 6 different model aircraft for PAN AM, beginning as a Flight Engineer on the DC-6and retiring as a Captain on the L-1011. After living in Vienna, VA for 33 years, Mr. and Mrs. Matthews moved to Winchester, VA in 2004. Their 5 acre homesite on a ridgeline outside of town offered them views of the Blue Ridge mountains, farmland, and the abundance of wildlife associated with a rural setting. Mr. Matthews enjoyed his time in the Shenandoah Valley for its slower pace of life, conservative, pro-American and Virginia values, opportunity to work his 5 acres of land, and to be able to age gracefully. A visitation (11:00AM) and memorial service (12:00PM) will be held on January 5th, 2018, at Opequon Presbyterian Church, 217 Opequon Church Lane, Winchester, VA 22602, with minister David Witt officiating. Burial will take place at a future date at Arlington National Cemetery. In lieu of flowers, please consider making a donation to Blue Ridge Hospice, 333 W. Cork St. Winchester, VA 22601 or by calling 540-313-9200.

Larry Delano Matthews, age 84, of Winchester, VA, died from prostate cancer at his home on December 18th, 2018. Mr. Matthews is survived by his wife of 51 years of marriage, Annemarie Hirsch Matthews, of Austria. He is also survived by his... View Obituary & Service Information

The family of Larry Delano Matthews created this Life Tributes page to make it easy to share your memories.