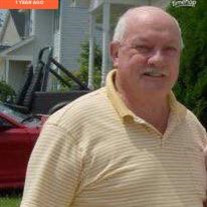 John Frederick Walters (Jack), 92, of Bunker Hill, formerly of Middleburg and Winchester, died Tuesday, August 4, 2020 in Willow Tree Manor, Charles Town, WV. He was born July 17, 1928 in Melton Mowbray, England the son of Jack and Sabina Orridge Walters. He married Evelyn Gray in October 1950, almost 70 years ago. His hobbies were gardening, cars, and spending time with his family. In addition to his wife, he is survived by his daughter, Karen Dean and her husband, Richard of Grottoes; grandson, Kristopher Walker and his wife, Sharon of Fredericksburg; great-grandchildren, Abby Walker, Bre Walker, and Kristi Edwards and her husband, Nathan; and two great-great-grandchildren, Brysin and Alden, and his sister Sybil Glascock. He was preceded in death by two brothers, Phillip and Duncan. Services will be private.

The family of John Frederick "Jack" Walters created this Life Tributes page to make it easy to share your memories.