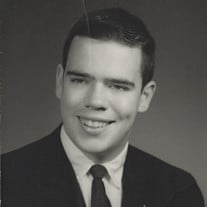 John Ralph Griffin, III, 72, of Stephenson, died Friday, April 5, 2019. “Grif” was born June 6, 1946 in New York to John Jr., and Monnie Whittington Griffin. He grew up in Princeton, NJ and Narberth, PA. He graduated from Denison University, where he met his wife, Carol Jane (Anderson) Griffin, to whom he was married for 49 years. After college, John and Carol settled in Northern Virginia, and John obtained his MBA from George Washington University. John enjoyed a long career as a government contractor and entrepreneur, having founded his own consulting firm. He was a serious sports fan, especially golf and soccer, which he also coached for twenty years. He was a devoted and beloved family man and is survived by his wife; his son Sean and daughter-in-law Catharine of Washington; his son Eric and daughter-in-law Austin of Alexandria; his grandchildren, John, Anne, and Edward; his sister Jill Griffin and brother-in-law David Loomis of Mt. Jackson; his sister-in-law Barbara Baraw of Stowe, VT; his nephews Kevin Robertson of Indianapolis, IN, Owen Robertson, of Sarasota, FL, Charles Baraw of Newtown, CT; and his niece, Sheri Baraw Smith of Stowe, VT. A celebration of his life will be held at 1:00 PM on Saturday, May 11, 2019 at Messiah United Methodist Church 6215 Rolling Road Springfield, VA, followed by inurnment at Fairfax Memorial Gardens. Friends and family will be received an hour prior to the service at the church. In lieu of flowers, memorials may be made to DC Scores or GenerateHope.org.

The family of John Ralph Griffin III created this Life Tributes page to make it easy to share your memories.