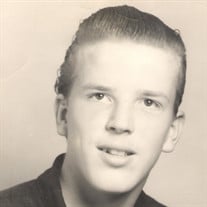 Jerry Allen Pierce, Sr., 71, of Boyce, VA, passed away peacefully at home on May 8, 2021. Jerry was born February 19, 1950 in Winchester, VA, the son of Thomas Clayton and Anna Virginia Pierce and was the youngest of ten children. He attended Clarke County High School and was employed by Smalley Box and Basket Company in Berryville, VA for more than twenty-five years before retiring. Jerry loved being outdoors and taking care of his many gardens. He loved the smell of cut flowers. He also enjoyed canning produce with his mother for many years until she passed in 2010. He was a devoted Raiders football fan, a former member of the Berryville Moose Lodge and a member of Mt. Olive Baptist Church in Middletown, VA. Along with his parents, Jerry was preceded in death by three brothers, Clayton, David and Wayne Pierce; and two sisters, Jeanette Fowler and Shirley Jones. His beloved Dachshund, Ginni, joined in the promised land on May 10, 2021. He is survived by his wife, Bonnie, together in life for forty-eight years. In addition to his wife, he leaves to cherish his memory, three children, Terisa Pierce, Jerry A. Pierce, Jr. and his wife Jamie and Jerri Love Northedge and her husband Eric; nine grandchildren, Shanté Pierce (Tyrell Fisher), Jocelyn Pierce, Sawyer, Jericho, Marisha and Kaleshia Pierce and Cate, Carly and Neve Northedge; seven great-grandchildren, Syann Mack, Tyasia, Genesis and Zyrell Fisher, Envyanna Martin, Saxton Pierce and Ambrielle Pierce. He is also survived by his best friend, Richard Silveous; one brother, William Pierce and three sisters, Anna Verts, Patricia Linster and Linda Orndorff. Visitation hours will be on Friday from 6:00 p.m. until 8:00 p.m. in Phelps Funeral Chapel, 311 Hope Drive, Winchester for family and loved ones to pay their respects. A celebration of life for family and loved ones will be on Saturday at 11:00 a.m. in the funeral chapel with Pastor Raymond Morton officiating. Burial will follow in Mt. Olive Methodist Church Cemetery, Hayfield, VA. Casket bearers will be Randolph Sloane, Billy Fowler, Tyrell Fisher, Jerry Pierce, Jr., Jeff Smith and Shanté Pierce. Donations in memory of Jerry may be made to Blue Ridge Hospice, 333 W. Cork Street, Winchester, VA 22601

Jerry Allen Pierce, Sr., 71, of Boyce, VA, passed away peacefully at home on May 8, 2021. Jerry was born February 19, 1950 in Winchester, VA, the son of Thomas Clayton and Anna Virginia Pierce and was the youngest of ten children.... View Obituary & Service Information

The family of Jerry Allen Pierce Sr. created this Life Tributes page to make it easy to share your memories.