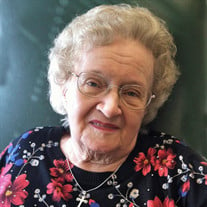 Mrs. Jenny Lou (Riddell) Rodger, 87, beloved wife, mother, grandmother, and great-grandmother, went to be with her Lord and cherished family members in Heaven on Saturday, January 27, 2018. Jenny passed peacefully, surrounded by her three daughters, at the Masonic Village in Elizabethtown, PA. She was the wife of the late Kermit J. Rodger who died December 7, 1994. They were married November 6, 1949, in Cumberland, MD. Born September 22, 1930, in Johnstown, PA, she was the daughter of the late George G. and Margaret Kathryn (Repp) Riddell. In addition to her husband and parents, Jenny is predeceased by brothers John, Frank, Richard Lee, and Gary; sisters Dorothy Evans, Margaret Ruth Wentz and Linda Dawson. Jenny is survived by her three daughters, Linda Lucille, married to Barry Brown, of Frederick, MD; Kathryn Louise, married to Michael DeLaquil, of Middletown, MD; and Dorcas Rodger, married to Terry Mella, of Oakton, VA. She is also survived by six grandchildren, Bethany Brown Harkawik, and her husband, John, of Frederick; Sarah Brown Almeida, and her husband, Carl, of Cary, NC; Nicole DeLaquil Kauffeld, and her husband, Bill, of Frederick, MD; Courtney DeLaquil, and her fiancé, Daniel Borne, of Fairfield, PA; Matthew Mella, and his wife, Amber (Brush), of Herndon, VA; and Heather Mella, and her fiancé, William Royston, of Herndon, VA; three great-granddaughters, Natalia and Alexia Chavez-Brown and Madilyn Rose Mella; and three great-grandsons, David and Matthew Almeida and Benjamin Ross. She is also survived by sisters Georgiana Zimmerman of Berlin, PA, and Lois Coleman (Edward) of Latrobe, PA. Jenny is also survived by numerous nieces and nephews. Jenny will be sadly missed and joyfully remembered! Mrs. Rodger graduated in 1949 from Quemahoning High School in Kantner, PA. She was employed as a diet clerk for 25 years at Fairfax INOVA Hospital and retired in 1994. She was a 55-year member of Trinity Chapter No. 138 Order of the Eastern Star in Somerset, PA, and also a member of the Daughters of the American Revolution. Jenny moved to the Masonic Village in Elizabethtown, PA, in 2007 and quickly became involved in volunteer service that included 15 hours each week in the gift shop; assisting Human Resources with fundraising mass mailings; serving as a one-on-one mentor to new residents; and most recently, helping to prepare monthly calendars for distribution to residents at the health care center. Jenny especially enjoyed participating in the bell choir. She enjoyed visiting with family and friends and cherished spending time with her grandchildren and great-grandchildren. Jenny’s family will receive friends and family from 2:00-3:00 p.m. on Thursday, February 1, at the First Frederick Church of the Nazarene, 7899 Opossumtown Pike, Frederick, MD. A celebration of Jenny’s life will be held during a memorial service beginning at 3:00 p.m. with son-in-law, Michael DeLaquil, officiating. Pallbearers will be Barry Brown, Michael DeLaquil, Terry Mella, Matthew Mella, Carl Almeida, John Harkawik, and Bill Kauffeld. Honorary pallbearers will be William Royston and Daniel Borne. Graveside services will be held at 11:00 a.m. on Friday, February 2, at the Odd Fellows Cemetery in Stoystown, PA, with Michael DeLaquil officiating. The deceased requested that in lieu of flowers, memorial contributions may be made to Shriners Hospitals for Children. To donate online, click on: https://www.shrinershospitalsforchildren.org/shc/donate. If you prefer to donate via a check, the address is: Shriners Hospitals for Children; Attn: Office of Development; 2900 N. Rocky Point Dr.; Tampa, FL 33607. Please note “In Memory of Jenny Rodger” on the memo line.

The family of Jenny Lou Rodger created this Life Tributes page to make it easy to share your memories.