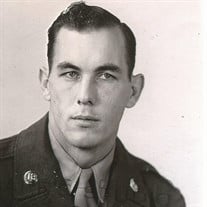 H. Briscoe Ginn, 93, of Winchester died Tuesday October 27, 2015 in Hilltop House Assisted Living. He was born November 15, 1921 in Winchester the son of Henry Briscoe Ginn Sr., and Mabel Lonas Ginn. He was married to Goldie Affleck Ginn on June 19, 1954. She preceded him in death on September 4, 1995. Briscoe graduated from John Handley High School in 1942 and enlisted in the US Army, serving in both World War II and the Korean Conflict. He was a member of Braddock Street United Methodist Church, the V.F.W. and the Benevolent Order of Elks, where he recently received an award for 50 years of membership. Professionally, he worked at Valley Distributors and the O’ Sullivan Corporation. He is survived by his nieces Irma B. Whitmire and Connie W. Middleton both of Winchester, Nancy Perdue, Cheryl Winn, and Bonnie Traylor; nephews, Richard Ward of Winchester, Eugene Laird, and Elwood Affleck, Jr.; sister-in-law, Marjorie Lonas, and long-time special friend Dorothy Hilton Beckwith of Arlington, MA. His parents, and siblings, Kenneth Lonas, Charles Ginn, Pauline Boone, Mildred Ward, and sister-in-law, Mozelle Affleck are deceased. A funeral will be at 2:00 p.m. on Tuesday in the Shenandoah Memorial Park Chapel, 1270 Front Royal Pike, Winchester with Reverend Frank Sherman officiating. Entombment will follow the service. Friends will be received one hour prior to the service in the chapel. In lieu of flowers memorial may be made to Braddock Street United Methodist Church-Organ Fund, 115 Wolfe St. Winchester, VA 22601.

The family of Henry Briscoe Ginn created this Life Tributes page to make it easy to share your memories.