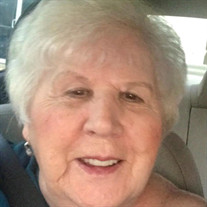 Gertraud Carmen Spence, 87, died Saturday, April 3, 2021 in her home in Stephenson, Virginia. She was surrounded by family at the time of her passing. Ms. Spence was born in Regensburg, Germany, the daughter of Josef Merkle and Frieda Merkle. After surviving World War II in Germany, Ms. Spence met her husband, Louis Kenneth Spence, many years later while he was serving in the United States Army as a medic. He was stationed in Regensburg, Germany, and that is where they met and fell in love. After traveling by boat to the United States for 10 days, they were married on October 31, 1956 in Winchester, Virginia. Louis and Gertrude were married for 60 years and had three children, Cordula Ash, Michael Spence, and Janet Shanholtzer. Ms. Spence was an incredible housewife and mother. She was known by all her friends and family as a wonderful cook, mother, and homemaker. She dedicated her life to taking care of her husband, children, and grandchildren. She was an amazing hostess and no one ever left her house hungry. She was a member of the local Fraternal Order of the Eagles #824, where she will leave behind many friends who loved her. She loved spending time outside, listening to music and dancing, and above all spending time with her family and friends. She never met a stranger, and showed her love to everyone around her. Ms. Spence is preceded in death by her husband, Louis, her daughter Cordula Ash, both of her parents, and her three siblings. Ms. Spence is survived by her children, Michael Spence and Janet Shanholtzer; her sister Renate Schnell; six grandchildren; twelve great grandchildren; and many close friends. A celebration of life will be held later this year at Sacred Heart of Jesus Catholic Church at 130 Keating Drive, Winchester, Virginia 22601.

Gertraud Carmen Spence, 87, died Saturday, April 3, 2021 in her home in Stephenson, Virginia. She was surrounded by family at the time of her passing. Ms. Spence was born in Regensburg, Germany, the daughter of Josef Merkle and Frieda Merkle.... View Obituary & Service Information

The family of Gertraud Carmen Spence created this Life Tributes page to make it easy to share your memories.