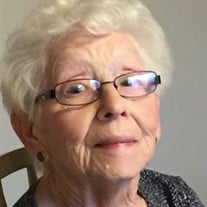 Eunice Hamilton Hensley, 84, of Bunker Hill, WV, formerly of Winchester, passed away on Thursday, January 31, 2019 while visiting her daughter in Davis, WV. Eunice was born on April 15, 1934 in Pound, VA. She was the daughter of the late Noy and Pearlie Hamilton. She was a graduate of Pound High School. She retired from Siemen’s VDO and also worked at J. Schoenemen. She owned Walter’s Grocery in Winchester, VA. Eunice is survived by her daughters, Pam Weaver and her husband Curtis Weaver of Bunker Hill and Laura Fost and her husband Tim Fost of Davis, WV; granddaughters, Laura Lehman and husband Brian Lehman of Hedgesville, WV, Becky Glassford and her husband Jeremy Glassford of Martinsburg, WV, Emily Fost of Belton, TX and Hannah Fost and Login Hibbs of Front Royal, VA grandson, Clayton Weaver of Hedgesville, WV; great-grandchildren, Garrett Glassford and Wade Glassford both of Martinsburg, Piper Lehman of Hedgesville and Melissa Vansosdale of Nevada; sisters, Marie Moore and Sally Leftwich both of Pound and brother, Trent Hamilton of Pound and many nieces and nephews. She is preceded in death by her husband Walter “Buster” Hensley, Jr.; her mother and father, Pearlie and Noy Hamilton and brothers, Edison Hamilton, Estel Hamilton and Edgar Hamilton. A funeral service will be Monday at 1:00 p.m. in Phelps Funeral Chapel, 311 Hope Drive, Winchester with Pastor Roy Riley officiating. Entombment will follow in Shenandoah Memorial Park. Casket bearers will be nephews, Harold Wayne Leftwich, Jr., Jeffrey Leftwich, Gerard Leftwich, Tim Moore, Dennis Moore, Clayton Weaver and Adrian Moore. The family will receive friends on Sunday from 1:00 p.m. until 4:00 p.m. in the funeral chapel. The family would like to extend their gratitude to Laurie Hines for her love and support while caring for their mother; and to Hospice of the Panhandle and Blue Ridge Hospice for all their care and support

Eunice Hamilton Hensley, 84, of Bunker Hill, WV, formerly of Winchester, passed away on Thursday, January 31, 2019 while visiting her daughter in Davis, WV. Eunice was born on April 15, 1934 in Pound, VA. She was the daughter of the late... View Obituary & Service Information

The family of Eunice Hamilton Hensley created this Life Tributes page to make it easy to share your memories.