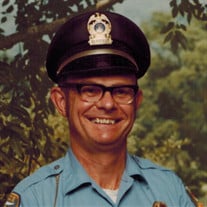 Donald Carroll Mort, 83, of Winchester, VA died Monday, December 1, 2014 in Winchester Medical Center. He was born August 23, 1931 in Detroit, MI the son of Arthur Carroll and Gladys Younker Mort. He married M. Jane Shoemaker November 7, 1953 in Winchester. Mr. Mort served in the US Navy as a deep sea diver from 1951 until 1962. He was a self-employed cabinetmaker; a sergeant for the Kalamazoo, MI Police Dept. and a commander of the traffic bureau and worked in Winchester as a building contractor. Mr. Mort was a member of the Winchester Church of God where he served as a board of council member, a choir member and was a member of the Prime Timers of the church. Surviving in addition to his wife are a daughter, Vicki Lynn Micheals and her husband Tim of Winchester; a son, Brett Carroll Mort and his wife Joann of Augusta, MI; a sister, Patricia Denemy of Petoskey, MI; four brothers, Jack Mort of Deland, FL, Keith Mort of Central Lake, MI, James Mort of Petoskey, MI and Charles Mort of Wildwood, FL; four grandchildren, Tianna Jenkins, Don Solesbee, Nancy Teague, and Jennifer Schaap and four great-grandchildren, Tobey Jenkins, Emma Teague, Luca Solesbee and Tommy Schaap. A funeral service will be Friday, December 5, 2014, at 11:00 a.m. in Winchester Church of God, 2080 N. Frederick Pike, Winchester with Dr. Darrell Waller officiating. Entombment will follow in Shenandoah Memorial Park, Winchester with honors by V.F.W. Post 2123. Casket bearers will be members of the family. Honorary bearers will be Don Checote, Paul Coffelt and Alfred Carter. Friends will be received at the church on Thursday from 6:00 p.m. until 8:00 p.m. In lieu of flowers, memorials may be made to Winchester Church of God Care Ministry or to Frederick County Esther Boyd Animal Shelter, 161 Ft. Collier Road, Winchester, VA 22603. Arrangements are by Phelps Funeral & Cremation Service, Winchester.

The family of Donald Carroll Mort created this Life Tributes page to make it easy to share your memories.