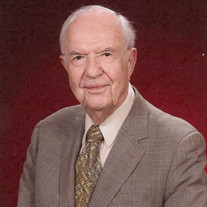 Reverend Donald DeVoe McKendree Jones, 94, of Winchester, died Sunday, February 3, 2019 in Westminster Canterbury. He is the Pastor Emeritus of White Plains Presbyterian Church in White Plains, NY. He was born September 1, 1924 in Philadelphia, PA the son of Pauline Williams and Olin McKendree Jones. He was married to Ann Padgette Jones for 17 years. Mr. Jones attended Trinity school in New York City. He graduated from Wesleyan University, Cum Laude, Phi Beta Kappa. During that time, he was enrolled in the Navy V-12 program during WWII as a pre-chaplain. Upon graduation from Princeton Theological Seminary, he joined the staff of the First Presbyterian Church, Lansdowne, PA. During his tenure, he responded to an invitation of the renowned psychiatrist, Dr. O. Spurgeon English, to explore the relationship of the Christian Faith to psychiatry. As a result, he entered into a program at Temple University for cross-training between the disciplines of pastoral care and psychiatry. This pioneering effort resulted in a full-fledged program to train clergy in psychiatric skills. During his pastorate at Bethany Presbyterian Church, he performed his own television program, "The Pastor's Study". He also produced and performed in special religious programs for Christmas and Easter on WGAL-TV. He designed and organized the volunteer chaplaincy program for the Lancaster Hospitals. He was also a charter member of the Lancaster Sertoma Club. While he was a pastor of Sixth Presbyterian Church in Washington D.C., he continued his television role as a monthly guest on "Inga's Angle” at WRC-TV, as well as serving on the Radio and TV Committee of the Council of Churches. Following that, he was called to be the Presbytery Executive in Seattle, WA where he had the responsibility of 25 churches in the area. He also participated in the founding of four new Presbyterian Churches, the Radio and TV Commission of Seattle, and a pastoral counseling service for the community. He also served in a similar position in Buffalo, NY overseeing 75 churches. After which, he was chosen to be the Planning Officer for the entire Presbyterian Denomination in NYC, NY. Concurrently, he served as a staff member to a Commission to Reorganize the General Assembly Agencies. Later, he became the Senior Pastor of White Plains Presbyterian Church in White Plains, NY. After retirement in 1989, he served in the behavioral health unit in the Winchester Medical Center as a chaplain. He coordinated the AARP Free Income Tax program for 10 years and saw that program grow from 300 to 3500 people served. He was member of the Rotary Club and regular guest pastor at local churches. In addition to his wife, he is survived by his children, Cheryl Ann Jones and her husband Felix Federowicz of Tampa, FL.; Stuart McKendree Jones and his wife, Ruth, granddaughter Stephanie Jones, grandson Stuart Jones, Jr.; and sister, Mary Geraldine Rhoades of Titusville, PA. His wives, Ann Brow Jones, and Paula Oaks Jones; granddaughter Suzie Jones, and sister, Alouette Hedges preceded him in death. A memorial service will be 3:00 p.m. Saturday in Westminster Canterbury Chapel 300 Westminster Canterbury Dr., Winchester officiated by Chaplain Elizabeth Lewis. In lieu of flowers, memorials may be made to Westminster Canterbury Employee Appreciation Fund 300 Westminster Canterbury Dr., Winchester, VA 22603 or First Presbyterian Church 116 S. Loudoun St. Winchester, VA 22601.

The family of Rev. Donald DeVoe McKendree Jones created this Life Tributes page to make it easy to share your memories.