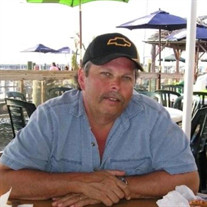 Dean Wesley Martin, 60, of Front Royal died Thursday, December 31, 2020 in Winchester Medical Center. He was born January 5, 1960 in Elizabeth, PA the son of Bob and Alma Hoffmiester-Martin. He was married to Regina "Tina" Martin for 34 years. He loved riding his Harley, fishing, time with friends and family, his golden retriever Dexter and his Yorkie Pepper, and relaxing on his back porch with a glass of fine bourbon. The way he died is just like he lived: he wrote his own rules, he fought authority and he paved his own way. His impish smile, sarcastic sense of humor, and stunning blue eyes that could make anyone love him. He lived 1000 years in the 60 calendar years we had with him because he attacked life; he grabbed it by the coat tails, kissed it. His motto was when life knocks you down you gotta pick yourself up and keep putting one foot in front of the other. He was a rare combination of someone who had a love of life and a firm understanding of what was important. His acute awareness of the importance of a life lived, with the ones you love over any material possession, was only handicapped by his territorial attachment to his Harley Davidsons. Of all the people he touched, both willing and unwilling, his most proud achievement in life was marrying his wife Tina who supported him in all his glory during his heyday, and lovingly supported him after his retirement, and raising a strong family. In addition to his wife, he is survived by 2 sons, Sam Martin and Bobby Martin, accompanied by his wife, Jackee of Strasburg. One granddaughter, Juliet Marie Martin. Services will be planned at a later date.

Dean Wesley Martin, 60, of Front Royal died Thursday, December 31, 2020 in Winchester Medical Center. He was born January 5, 1960 in Elizabeth, PA the son of Bob and Alma Hoffmiester-Martin. He was married to Regina "Tina" Martin for 34 years. He... View Obituary & Service Information

The family of Dean Wesley Martin created this Life Tributes page to make it easy to share your memories.