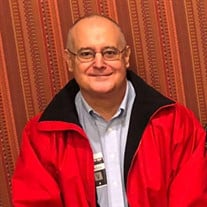 Christian Jarrell Griffin, 58, of Winchester died March 13, 2018. He was born June 12, 1959 in Falls Church, VA the son of Dr. Alfred Sr., and Catherine Scoblick Griffin. After graduating from Bishop O'Connell High school, he received his bachelor's from the University of Richmond. He earned a Doctorate of Jurisprudence from McGeorge School of Law, and a Master's of Business Administration from Texas Christian University. His hobbies included hiking, music, especially the Eagles, and sports. He was a fan of TCU football, as well as, all Washington teams: the Redskins, Capitals, & Nationals. He worked as an attorney in Winchester and was a member of the Virginia State Bar Association. Christian was a thoughtful and gentle soul who cared deeply for his family and impacted the lives of so many, especially those in need of encouragement or support. His sense of humor, compassion, positive attitude, and message of perseverance brought joy to everyone around him. He will be deeply missed. In addition to his mother, he is survived by his former spouse, Laura Griffin; sons, Christian Griffin, Jr., and Connor Griffin, all of Winchester; a sister, Karen Flikeid and her husband Dr. Rob Flikeid of Warrenton, two brothers, Dr. Alfred C. Griffin, Jr., also of Warrenton, and Dr. William T. Griffin and his wife Linda of Yorktown, and a large extended family. His father is deceased. Arrangements will be private by Phelps Funeral Service.

The family of Christian Jarrell Griffin created this Life Tributes page to make it easy to share your memories.