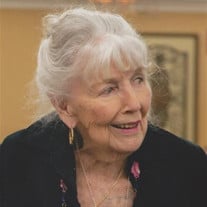 Anna Lucille Eldridge Harkless was born in Hagerstown, MD on April 24, 1917 to Russell Andrew Eldridge and Hallie Marie Warnock. By age three Lucille showed her musical and performing talent so her grandmother enrolled her in dancing school. Later she added voice, piano and elocution lessons. Lucille loved the arts and all the lessons. At Hagerstown High School Lucille played basketball, was a cheer leader and played the lead in Death Takes a Holiday and The Comedy of Errors. Many years later when she saw The Comedy of Errors in Stratford-upon-Avon she remembered the dialog and mouthed along under her breath. Lucille attended William and Mary College, where she made lifelong friends and joined the Pi Beta Phi sorority. She was a theater and fine arts major, and on Sundays was a soloist at the Bruton Parish Episcopal Church in Williamsburg. Every year she starred in the Gilbert and Sullivan productions opposite the male lead, Armand Harkless. After graduating in 1939 Lucille married Armand, and moved to New York City where both studied music at the Juilliard School. When war was declared, Armand enlisted in the Army Air Force. Lucille was fortunate to be able to follow him to Texas, Louisiana, and California. After the war, Armand returned to Juilliard for further training. In 1952 Lucille and Armand moved to Washington, D.C. where Armand was the soloist at the Washington National Cathedral. Lucille and Armand divorced in 1959. For a while Lucille worked as a real estate agent, but found the hours conflicted with raising three children. Reluctantly she accepted a friend’s suggestion to teach at Sheridan, a private school in Washington. To her surprise she enjoyed it, and taught first grade for a year and third grade for seven years there. In 1968 Lucille joined the faculty of the McLean School in Potomac, MD., one of the first schools to accept children with learning difficulties. Hired to teach first grade and tutor upper school students in reading. she later became McLean’s mainstream third grade teacher. She brought her energy and enthusiasm to that classroom until she retired. For ten years she acted as Director of the Junior Camp at McLean School’s Camp Inverness, hiring counselors, interviewing parents and running the nine week summer program for 75 three to eight year olds. She also served the School as a Founding Trustee, as a member of the Education Committee, a curriculum committee, and the Long Range Planning Committee. After retiring in 1989, at age 72, she volunteered as a docent at the Phillips Collection, an art gallery in Washington, for the next 15 years where she enjoyed learning about the art and working with the museum staff. As an only child Lucille’s friends were very important to her. She made friends of all ages easily and kept up with them avidly. Although she had given up performing to raise her family Lucille was a lifelong theater and opera enthusiast and often took friends along. She was always eager to travel and did so extensively in the U.S., Europe and Asia with friends and family. She was entertaining company, told a good story and had plenty of material to draw on. She appreciated humor even at her own expense and had an infectious laugh. Once in Sicily her bed broke, folded her up inside, and she and everyone else laughed so hard it took a long time to extract her. Lucille lived alone in her house in Georgetown for 33 years. At 96 she decided she was tired of cooking and moved to Westminster Canterbury where she was very happy with friends, the variety of activities and playing bridge. Lucille is survived by her three children, seven grandchildren and six great grandchildren. A memorial service will be held at 2:00 p.m. Thursday, October 3rd in the Westminster Canterbury Chapel (300 Westminster Canterbury Drive, Winchester, VA). The service will be officiated by Elizabeth Lewis and Webster Gibson. In lieu of flowers donations may be made to the SVWC Employee Appreciation Fund (℅ Todd Lilly, 300 Westminster Canterbury Drive, Winchester, VA22603), or the Blue Ridge Area Food Bank (P.O. Box 937, Verona, VA 24482).

The family of Anna Lucille Eldridge Harkless created this Life Tributes page to make it easy to share your memories.

Anna Lucille Eldridge Harkless was born in Hagerstown, MD on...